“Human rights were born. The idea spread quickly, to Greece, to India, and eventually, to Rome. They noticed that people naturally followed certain laws, even if they weren’t told to. They called this ‘natural law’…”

According to the video, ‘natural law’ eventually evolved into ‘natural rights,’ which is directly related to civil rights and human rights in many ways. The problem is, everyone seems to have their own interpretation of what constitutes ‘natural law’. In his book, Political Theory: An Encyclopedia of Contemporary and Classic Terms, Scott Hammond points out several different perceptions of what ‘natural law’ can mean.

Some people believe they’re the divine rights each human is entitled to “because of our status as creatures of God”. In other words, we have the right to equality because we were all “created equal” by God. (This gets tricky when we consider free will.) Some people go so far as to say that the political system is a creation of God and that “human beings give their consent [to authority] because it is natural for them to do so”.

Cicero said that natural law was “nothing less than ‘right reason,’” meaning that everyone has their own system of morality and that they’ll act and live according to the “ability of their own intellect”.

Jeremy Bentham “rejected any moral or legal principle incompatible with the doctrine of utility,” which meant that “all values are to be traced back to the expansion of pleasure and the reduction of pain”. So if it makes me happy to kill you, am I maximizing utility? No. John Stuart Mill believed that we should behave according to what’s going to yield the greatest amount of happiness for everyone. So even if killing you makes me happy, it makes a whole lot more people unhappy and therefore, I shouldn’t do it. (Tough concept, huh? Yeah, not so much.)

This gets a little bit into the ‘nature vs. nurture’ debate, which I’ll try to avoid here, but in the paraphrased words of Aristotle, every action and pursuit is thought to aim at some good, and for this reason, the good has rightly been declared that at which all things aim. I love this because it expresses a belief that people are inherently good which, okay, yeah, is super debatable.

But we can go even further and talk about how there are even different interpretations of what is “good,” right? Thomas Hobbes actually said the opposite. He said that by nature, you and I are not friends and that naturally, we are enemies. You are simply an obstacle for me to overcome so that I can venture on my path to self-interest and personal gain. (I give this guy the “most depressing philosophy” award for this evil combination of natural selection and Ayn Rand’s objectivism.)

When I think of ‘natural law,’ however, I think of laws that should just come naturally for people to follow, instinctively. I think of the things that are really difficult for the opposition to argue. For example, no one’s going to ever make us believe that sexually molesting children is a good thing, right? No one’s ever going to convince us that slavery has a place in nature. And we can’t imagine a valid argument for rape, regardless of how “legitimate” Todd Akin thinks it is. You don’t force someone into marriage. You don’t let your neighbors starve. You don’t abuse or neglect animals, children or anyone else. It’s not quantum physics, you know?

So when it comes to ‘natural law,’ I don’t believe that God’s presence is necessary to reinforce it. I don’t think people shouldn’t do certain things simple because they’re afraid that if they do, they’ll go to Hell. They do it naturally. Does a child know the threat of God? If not, how do you explain his kindness? How can he possibly be kind without someone promising a fiery eternity in the absence of his kindness?

It’s actually crazy to me that we haven’t evolved beyond the repercussion motive—regardless of our religious beliefs—and just do the right thing because it’s the right thing. I believe people should act according to their own moral compass and if that fails them, then it’s time for justice to step in. Ah, justice. There’s another one of those vague words again. The line between just and unjust is so blurry sometimes that it’s exhausting. Personally, I’m a fan of a little civil disobedience when it’s in order. Which is pretty frequently.

As Rev. Dr. Martin Luther King, Jr. wrote from a Birmingham jail cell, “One may ask: ‘How can you advocate breaking some laws and obeying others?’ The answer lies in the fact that there are two types of laws: just and unjust. I would be the first to advocate obeying just laws. One has not only a legal but a moral responsibility to obey just laws. Conversely, one has a moral responsibility to disobey unjust laws.” 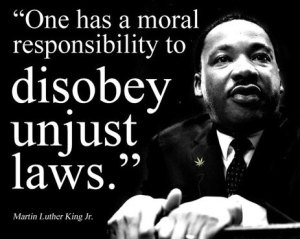 I use King because he believed that the rights for which he fought impacted the people fighting for rights all over the world. He truly believed that “injustice anywhere is a threat to justice everywhere”. He was fighting for “civil rights,” but is there really a difference? He might as well have been fighting for natural rights, right? Or human rights. They’re all the same thing, and I’m inclined to use them interchangeably because that’s my interpretation of them.

According to the U.S. Department of Health and Human Services, “Civil rights are personal rights guaranteed and protected by the U.S. Constitution and federal laws enacted by Congress, such as the Civil Rights Act of 1964 and the Americans with Disabilities Act of 1990.”

*THE RIGHT TO VOTE

*DUE PROCESS OF LAW

*EQUAL PROTECTION OF THE LAWS

Sound familiar? Sounds an awful lot like the Magna Carta and all those other documents we’ve discussed. By the way, to my friends in same-sex relationships, did you catch that last one? See, sometimes, like the UDHR, we don’t really adequately enforce the “rights” we put on pieces of paper. This goes back to the small changes made by people like you and me that have to happen in order to set these inconsistencies right.

Click here to learn all about the human rights you probably never even knew you had!

I love hypothetical conversations about how to survive the apocalypse. I love arguing over which musicians I could combine together to form the perfect band. I love conducting research, and I appreciate my resources. I love freedom (or at least the ones that haven't yet been revoked), and look forward to the day that everyone will have the same ones. View more posts

2 thoughts on “The Nature of Civil Disobedience”

This site uses Akismet to reduce spam. Learn how your comment data is processed.